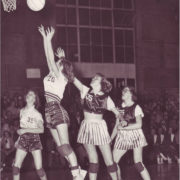 In honor of attending the 100th IGHSAU’s Girls State Basketball Championships this weekend, here is a brief look at how 6-on-6 basketball began.

Iowa 6-on-6 basketball originated in Dubuque in 1898. The rules of the game were transformed by the National Committee of Women’s Basketball in 1899 after a year of playing by 5-on-5 standards. 6-on-6 basketball was competitive, fast-paced and encouraged physical play among all players. The sport’s popularity grew statewide and in 1920, 24 teams of girls competed in the first girls’ basketball state tournament.

In 1972, Congress passed Title IX which aimed to give equal treatment to men and women in schools. This law allowed girls to play in all sports by 1975, but unfortunately also ended 6-on-6 basketball. Although it may be gone, 6-on-6 basketball will always be remembered as the game that gave over 1 million girls the opportunity to play competitive sports and will forever remain a legacy in the state of Iowa.

They say time flies when you’re having fun. Today, February 11, 2019, marks the five-year anniversary of Maynard 8 Miles being published. 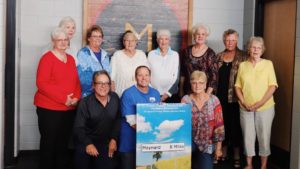 As we move forward in this journey, I want to thank everyone who has been involved by either reading the book, sending their words of encouragement or shared their personal stories. I look forward to what the next five years will bring.

For now, I’m looking forward to attending the Iowa Girls State Basketball Tournament Feb. 28-March 2. Feel free to stop by my booth Thursday-Saturday to pick up your copy of the book.

My father, Glenn Borland, was involved in the Madison Metropolitan
School District for more than 30 years, 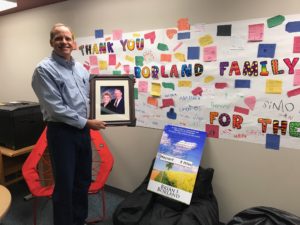 including being the Interim Superintendent. After he passed, my family wanted to seek a way to appropriately honor the memory of our parents.

After finding out that a local elementary school, Falk Elementary, was launching a Dual Language Immersion (DLI) program during the 2017-18 school year, we knew we had to help. On Nov. 7, 2017, myself, along with Liz and Brad decided to purchase more than 400 books and donate them to the new reading corner. We also donated close to 250 copies of the Maynard 8 Miles book.

For more information, watch this clip on NBC 15.