You are here: Home / / Uncategorized / Info on Glenn Borland Jr. 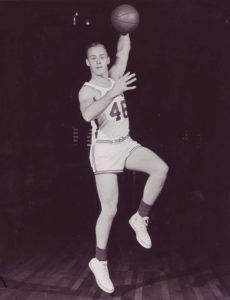 Glenn Borland Jr., grew up in Oelwein, Iowa, just eight miles from my mother Carolyn. He was adopted by his parents Glenn Sr. and Linda as a three-month-old.

Like my mother, he too played and excelled at basketball. He went on to play college basketball for the University of Wisconsin Badgers, where he served as team captain and played against the likes of Wilt Chamberlain.

After graduating, Glenn, Carolyn and their three kids lived primarily in Madison, where Glenn was a prominent educator and academic administrator.